Hive launched Friday via a hard fork off the Steem blockchain. Steemit has since retracted the majority of its community support delegations and many dapps and projects have migrated to and voice support for Hive. Can Steem survive this?

In this, we will cover the Hive launch, the Hive airdrop, Dapps that have moved to Hive, Steemit’s censorship, Steemit’s delegation removal, and the future of the two chains. Let’s dive in. 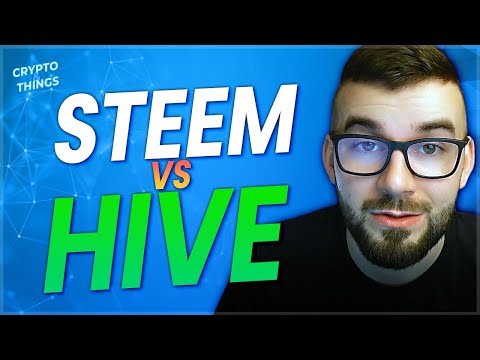 I was made aware that I was excluded from the airdrop for Hive recently. I went and checked and yes, I was in-fact excluded. I contacted the devs on Hive in their telegram and they’ve since delegated me more Hive power than I had originally in Steem power while they go through appeals and fix the mistakenly withheld airdrops including mine which will be done in the second stage of the airdrop where they go through appeals. I will update you on my Hive airdrop as I get more information and while I’m not super happy about this, I’m sure they will get me my airdrop as promised.
This is a list of the accounts excluded from the airdrop of which I was included - https://steemit.com/hive-101145/@kopasi/this-is-called-the-hive-airdrop-exclusion-list-hive

Many creators have been censored on Steemit which isn’t Steem, but because Justin Sun and Tron have control over what appears there, they have been removing posts related to Hive saying it “violates their terms” saying that no platform would allow the promotion of other platforms on it. That’s completely false. Facebook did this for a time regarding Minds.com but have since recanted. Ironically, that means that Steemit is more aggressive at censoring competition than Facebook. Many creators have voiced this on other platforms to let people know as even posts pointing this out were censored on Steemit too.
Two announcements from Steemit regarding this change: https://steemit.com/tron/@steemitblog/an-open-letter-to-the-community-hf22-5 & https://steemit.com/steem/@steemitblog/we-are-making-good-progress

I’m sure if anyone from that bunch catches wind of this, it too will be censored from Steem. Luckily, as I mentioned above, Steemit is not Steem and many other people can still see and interact with the censored content outside of Steemit. You may also notice that a lot of the account that voice support was created very recently aside from a few witnesses. Some notable dapps that have committed to staying are DTube, SteemHunt, Drugwars, Fundition, Oracle-D, Steempress, and a few others.
I have a lot of respect for the DTube and Fundition team as I have a relationship with them, but for all these projects that are groveling to Justin and pledging their support just to get a delegation back feels like they’ve given up on their community and only care about appealing to Justin’s ego in order to get their power back.
Steemit has also been having a lot of issues regarding availability. Currently, I get internal server error while trying to access it and cannot do anything there. Though, it’s been on and off randomly.

Projects that lost delegation from Steemit:
The witness Ausbitbank did an overview of the many community-serving projects and dapps to show you how much Steem power they lost which was all consolidated into Justin Sun’s account. You can find that here: https://steempeak.com/steem/@ausbitbank/misterdelegation-just-moved-sp-from-abuse-fighters-to-abusers

Some notable dapps that lost delegation:
DTube – My favorite dapp for sharing video to Steem and the DTC blockchain. They went from 2 million down to 200k delegated. This is huge because DTube is one of the most followed accounts and biggest supporter of video content creators.
Oracle-D – 2 million down to 50k delegated.
SteemHunt – 1 million down to 300k delegated.
Fundition – 1 million to 100 SP – They basically destroyed this project which is about crowdfunding and charity donations which is pretty despicable.
Esteem – 500k down to 20k delegated. A major platform for mobile users using Steem. Given Partiko moved to Hive, Steem now has no supported mobile dapp.
Busy – 500k down to 100 delegated. They sucked out their funds and Busy moved to Hive.

Some key projects that were focused on spam and helping deal with abuse that lost delegation were:
Spaminator – 2.7 million down to 100 delegated. A great initiative for combating spam now inactive allowing spam to run rampant on Steem.
Steemcleaners – 1.5 million down to 100 delegated. Another great initiative for dealing with abuse, flag reports, false flagging, plagiarism, and more.
They essentially took away all the delegations from a bunch of platforms and any platforms that were drained to 0 essentially migrated to Hive and those who were left with some stayed.
There are more in the original link which you can review, but I wanted to cover some of the big projects here to make sure people know what’s going on. The Steem business alliance was created this year in January made and recently posted an open letter to Justin here https://steemit.com/delegations/@steemba/open-letter-from-dapps-to-justinsuntron. This includes the signatures of key people from DTube, SteemHunt, Oracle-D, Fundition, and Drugwars. They also wrote 3Speak, but I’m not sure if they have the authority to claim this given TheyCallMeDan from 3Speak is the owner and has full support for Hive.

Notable changes and important projects that have migrated to Hive:
The SteemFeed-JS software for witnesses now has Hive support for witnesses who want to switch over - https://busy.org/@someguy123/steemfeed-js-v3-1-0-released-easier-to-use-and-now-hive-compatible.
Steemcleaners has dedicated its activities to Hive under the project name of HiveWatchers. You can see one of their recent reports here for Hive here: https://busy.org/@steemcleaners/hivewatchers-report-for-10-march
Steemauto has set up Hive Vote to do the same thing. You can schedule posts, build a fanbase, follow a curation trail, and even automate claiming your payouts. - https://steemit.com/steemauto/@steemauto/steemauto-back-online

Dapps that have migrated:
Steem.craft – A Minecraft game integration that works with Hive - https://www.battlegames.io/hive/@immanuel94/steem-craft-is-moving-to-hive
Partiko – Migrating to Hive, but no announcement yet. - https://partiko.app
Busy – Another interface to access Steem that has migrated - https://busy.org/
Peakd – A Steemit alternative platform that has moved to Hive - https://peakd.com/hive-163399/@peakd/peakd-live
Splinterlands & Steemmonsters – These are cards games that utilize Steem currently but will be offering full support for Hive as well - https://steemkr.com/splinterlands/@splinterlands/splinterlands-plans-for-the-upcoming-hive-fork

While there are some platforms and projects that haven’t drawn a line in the sand yet, I’m very curious to see how this all plays out and will update you when I know more.
If there’s anything I’ve mistakenly included or missed, please let me know. What do you think will happen to Steem going forward? Have you started to use Hive? What do you think about all of this?